Did you know that Dolphins sleep with one eye open?

Because they have lungs like us, they need to surface for air. In order to keep breathing and to be on alert while they rest, both brain hemispheres, left and right, are awake by turn. Cool right? They usually sleep around 8 hours daily, just like us.

They can communicate with each other through squeaks, buzzes, whistles, clicks, and a wide repertoire of other crazy noises that can be heard by others of the species from miles away.

To communicate and to be able to see better underwater they use a system called echolocation that works like a sonar does. They send a series of high-frequency clicks that bounce off the target and give its distance, shape, size and speed.

Did you know that dolphins are born with body hair?

The newborn calves have hairs on their rostrum, or beak, that then falls out soon after birth. This is believed to be an evolutionary remnant from when they were land creatures.

Do you know that the closest living relative of Dolphins and Whales is the Hippo?

What? Yes, they share a common ancestor that lived on land about 50 million years ago.

Dolphin’s diet can vary depending on the region where they live. They are skillful predators that primarily eat fish but can also hunt other marine life such as squids and cuttlefish.

Feeding and hunting in pods, Dolphins sometimes work hand in hand with humans. Like in the fishing village of Laguna in Brazil where local fishermen and Dolphins work together in order to catch fish.

Dolphins herd the fish towards the beach where fishermen are waiting with their nets to trap them. They even use their tails, also called flukes, and splash the water pointing fishermen to where to throw the nets. Amazing right?

Dolphins are large, intelligent and gentle sea creatures who seem to seek out human company, playing, frolicking, even communicating

The most frequently observed species in Lagos and the Algarve are the common dolphin, Delphinus delphis (ficha técnica), the bottle-nosed dolphin, Tursiops truncates and the harbour porpoise Phocoena phocoena.

The common dolphin often lives in groups of small pods of 20-30 animals to big groups, joining together to form a super or megapod which can result in thousands of animals. It’s quite a spectacular sighting.

They are small and have a hourglass tricolor pattern of grey white and yellow. These sleek and fast swimmers usually seek the boat and your attention. They love to surf the bow wave. Great time for a photo.

The bottle-nose dolphin can reach up to 3 meters in length and is the most abundant specie inhabiting temperate and warm seas all over the world. They are gentle and can swim up to 18mph and they often porpoise. They also like to ride ocean swells or a boat’s bow and stern wake for extra speed.

The harbour porpoise is cute and compact and shows that good things do come in small packages. Most sightings are often just them on their own and the most common social grouping is the mum and her baby. The easiest way to spot them is by the small distinctive triangular shape fin set just past the centre of their back.

Like in a safari, these encounters are all different, but always special and unique. And, to reassure you, we take extraordinary care and make sure that dolphins are not harmed. The company complies with local and international rules and guidelines for Dolphin Watching and sea life preservation.

This word derives from the order Cetacea and it’s where we can include marine mammals such as Dolphins, Orcas, Whales and Porpoise.

There are 86 species in this order that can be divided in two major groups: the Mysticeti (toothless whales or Baleen Whales) and the Odontoceti (toothed whales). This last one includes Dolphins, Orcas, Porpoises and all the 73 toothed know whale species such as beak and sperm whales.

All these amazing sea creatures have evolved from land mammals that adapted to the ocean life while searching for food. The closest living relative to the Cetacea order is the Hippo.

As you cruise these waters you can find and meet other amazing and unique sea mammals like Orcas. These sightings can occur throughout the months of March and September. During this period of the year, they migrate towards the strait of Gibraltar in search of the well-known Atlantic bluefin Tuna, the biggest tuna in the world.

Orcas, also called killer whales, are an apex predator and are in fact what you can call a very large dolphin. You can easily spot them by the distinctive tall and black dorsal fin and by a black and white colour pattern on their body.

The sighting of whales can also occur, but it is more difficult to spot them since they dive for long periods of time and you are only able to see them as they surface for air.

The most common species to be found in this part of the Atlantic Coast is the Minke whale and the Fin whale, both toothless whales (baleen whales) of the Mysticeti group.

The small Minke whale when it surfaces shows her characteristic dorsal fin, most of her back and her blowholes.

Regarding the Fin whale, the second largest living mammal, only topped by the Blue whale, can be distinguished by her tall spout, protruding dorsal fin, large size and its asymmetrical coloration.

During your cruise you can also encounter a variety of fish, sharks, birds and other sea creatures that play a very important role in the cetacean’s natural habitat.

The Ocean sunfish, also called Sunfish or Mola, is regularly seen in these waters and it’s well known for its peculiar and round like shape. It has two dorsal fins and a large rudder shaped tail fin that helps him to control his body’s sculling movement. The sunfish can swim very close to the surface, but it will also dive at great depths while searching for food. His diet consists mainly of fish, jellyfish, crustaceans and squids.

A common visitor to these waters and easy to spot and identify is the impressive but gentle Basking shark. He can be seen in the surface basking with its dorsal fins out of the water and his distinctive lunar shape caudal fin. You can also see him cruising forward or in short arcs with its open mouth as it feeds on the floating plankton. His enormous, hooped shape gill slits that cover most of his head allow him to filter the ocean water. They can live up to 50 years and with an average size of almost 10 meters, they are the second largest fish in the ocean only bested by the Whale Shark.

The Loggerhead turtle can be seen sometimes on its ocean migration cycles as the Mediterranean Sea acts like a nursery for this species. This marine reptile is one of the biggest hard-shelled turtles in the world. Her name comes after its distinctive big head and powerful jaws used to break and crash clams and sea urchins. They can dive until 100 meters of depth and stay under the water for 30 minutes long. They date back to the time of the dinosaurs and are classified as a vulnerable specie due to bycatch from the fishing activity.

The most common seabird found in this area is the Gull or Seagull. There are as many as 19 species that can be spotted in Portugal. Here in Lagos, they can be observed all year round. You can find them following local fishing boats as they come into the harbour and also in land on big colonies in the rock formations of Ponta da Piedade. This monogamous and medium to large bird is easily adaptable and is an opportunistic feeder with a diverse range of prey.

The Northern gannet can be sighted on its yearly migration. Their known for their dramatic dives as they hunt for squids and fish. They reach deeper than most airborne birds as they dive and strike the water at speeds of 60mph. Sometimes you can observe them from the beaches of Meia Praia or Dona Ana as shoals of fish come close to shore.

A usual resident for its winter break is the Great cormorant that stays here between September and April and who is also a very efficient diver and hunter. The estimated number of fish that it catches daily is between 25 to 30 fish depending on the time of the year and how cold the waters gets. On land they can be seen drying their wings facing the sun on the cliffs near Lagos, Praia da Luz and Sagres.

The European storm petrel can also be observed on its migration path during the summer months. These small gregarious birds fly very close to the ocean’s surface pattering it as they catch their food that consists of floating Marine plankton.

The Algarve coast has an unique combination of sandy beaches, golden sands, dramatic cliffs and unspoiled Natural Parks. Places like Tavira, Carvoeiro, Sagres or Odeceixe are amongst some of the most beautiful spots in the region and also a must see.

Close to Lagos, you can find the rock formations of Ponta da Piedade with its 19th century Lighthouse. This breathtaking landscape dates back to the Miocene epoch some 20 million years ago. Dramatically rising from the ocean floor this ancient limestone has slowly eroded into small hidden beaches, grottoes and sea caves. As you hike around, you may find an array of marine fossils embedded on the cliffs providing you with a living record of how life was a long time ago.

Sailing down the coast towards Sagres you will find the black rock of Praia da Luz. This lava type rock, erupted from nearby Monchique, some 70 million years ago. It’s a fantastic place to snorkel and dive as you can observe the fantastic lava formations build on the ocean floor.

Further down the coast you enter the Natural Park of Sudoeste Alentejano e Costa Vicentina. This natural wonder extends for 110 km, which 80 km are located between Odeceixe and the fishing village of Burgau. Walking around can be a surprising experience as you will be able to find footprints from Dinosaurs. There are located near Salema Beach and date back to the Lower Cretaceous period, some 120 million years ago.

The visible western tip of the coast is called Sagres believed to be the end of the world in Roman times. This village is also known for its strategic location and the role played in the golden age of Portuguese Discoveries. There is a 16th century fortress overlooking the bay that you can visit. Behind it, you will find the most southwesterly point of continental Europe, Cape St. Vincent with its iconic lighthouse.

This all area is very windy and home to an unique fauna and flora. It’s also a great spot for birdwatching. Innumerous migrating birds stop and rest here on their long journeys across the ocean.

Special moments for you

Are you in the Algarve and looking for the best that is done here? We leave you with the most useful tips, the latest news and everything you need to have an authentic experience.

Are you in the Algarve and looking for the best that is done here? We leave you with the most useful tips, the latest news and everything you need to have an authentic experience. 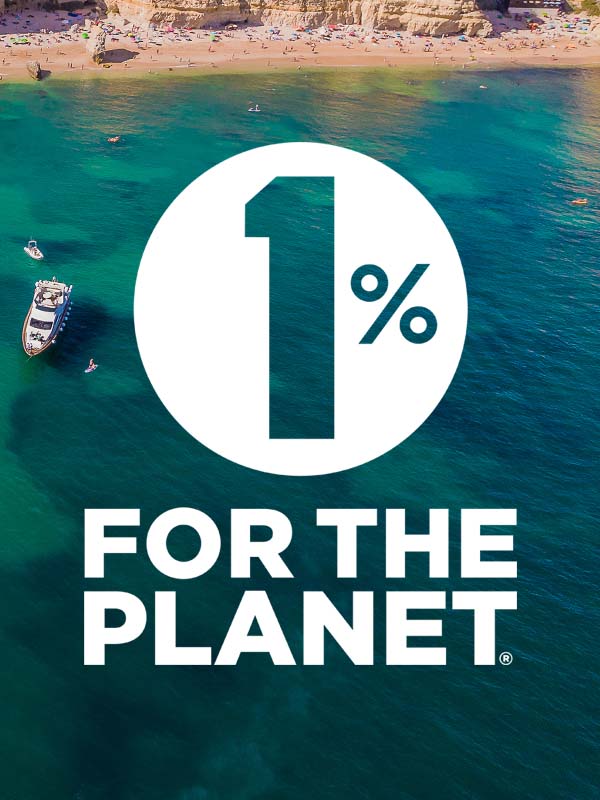 give back to the planet 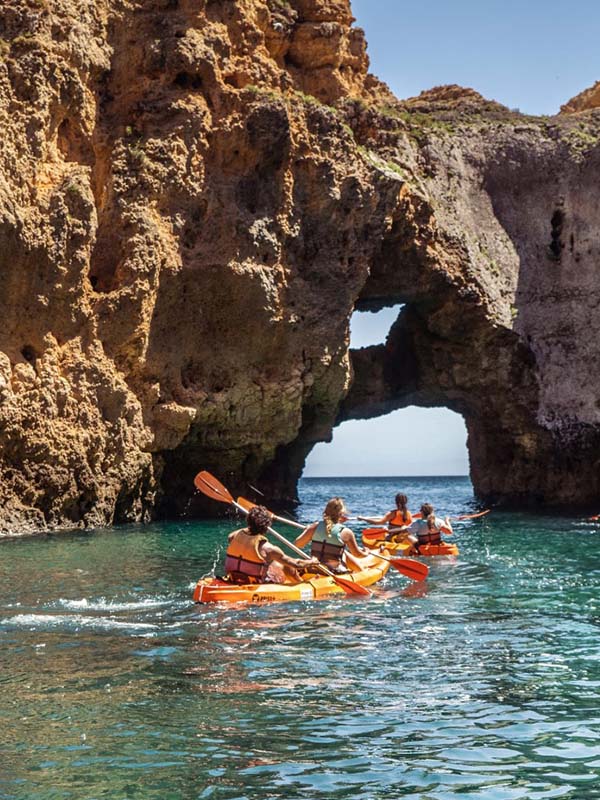 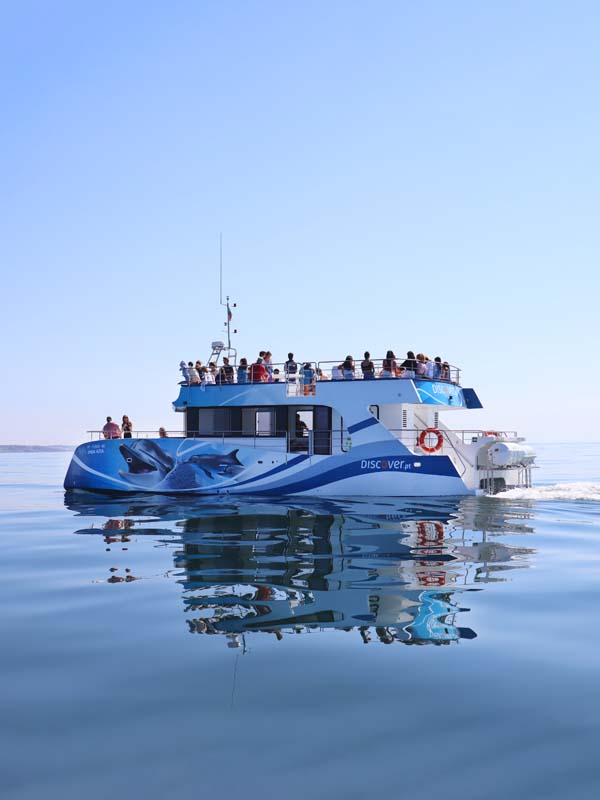